Inclement weather cut the day short in Paris on Tuesday, but it did not dampen everyone who took the court.  Here are some of the players for whom rays of sun shone through the clouds.

Novak Djokovic:  Outside one sloppy service game in the second set, the world No. 1 comfortably handled not only his opponent but the odd atmosphere of a twilight match.  Djokovic never looked seriously troubled by David Goffin, one of last year’s surprise headlines here.  If Roger Federer looked brilliant in his opener, and Rafael Nadal looked vulnerable, Djokovic looked unspectacular but solid. 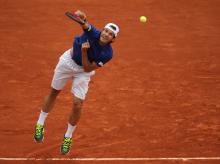 Tommy Haas:  Any concern about his fitness for Roland Garros after he withdrew from Nice last week faded when Haas demolished his first opponent.  Recall that Haas came closer than anyone to halting Roger Federer’s successful bid for a career Grand Slam in 2009.  Although he seems more suited for fast courts like grass, his experience has shown him how to adapt his weapons to clay.

Women’s seeds:  All six of those in action on Tuesday survived the first round, most of them comfortably.  Former Roland Garros semifinalist Dominika Cibulkova impressed with an efficient victory on an outer court, while 2010 runner-up Samantha Stosur yielded just two games in a statement of intent.  Flying under the radar for most of this season, Stosur continued to build on a strong week in Rome and may become an intriguing dark horse moving forward.

Guido Pella:  The little-known Argentine won the first main-draw match at Roland Garros 2013 that extended beyond 6-6 in the final set.  Unable to finish off Ivan Dodig when he led two sets to one, or when he led by an early break in the fifth set, Pella eventually found himself two points from defeat.  But he hung onto his serve six straight times when he needed a hold to stay in the match, and then broke Dodig at 10-10 before holding serve one last time.

French women:  Saving two match points in a thriller on Court Philippe Chatrier, Marion Bartoli narrowly survived Olga Govortsova after three hours.  The Paris crowd stood firmly in her corner when adversity confronted her in the form of 12 double faults.  Less eventful were the victories notched by Bartoli’s compatriots, Alize Cornet and Kristina Mladenovic.  If all ships rise with the tide, perhaps Caroline Garcia will give Serena a worthy test on Wednesday.  (Although that’s a lot to ask.)

Mikhail Youzhny:  Four relatively straightforward sets sufficed to see the Russian past a dangerous underdog in Pablo Andujar.  Superior to Youzhny on clay, Andujar had reached semifinals in Madrid and last week in Nice.  This soft section of the draw offers several different players a chance at a quarterfinal berth, and Youzhny might become one of them if he continues this form. 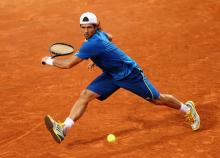 Fernando Verdasco:  In the same section as Youzhny, this Spanish veteran issued a compelling statement of his own.  Verdasco lost just six games in his first match, closing it out just before darkness to assure himself a full day of rest.  While his best tennis lies behind him, as it does for Youzhny, his lefty serve and forehand have caught fire recently against elite opponents.

Jack Sock:  The Nebraska native who won a US Open mixed doubles title in 2011 recorded his first career victory at Roland Garros.  Sock overcame a significant gap in clay expertise and experience to topple Guillermo Garcia-Lopez with unexpected ease.  His victory dilutes the disappointment suffered by Alex Kuznetsov, the reciprocal Roland Garros wildcard for the United States.  Kuznetsov fell to a French journeyman in the first round, failing to profit from the hard work at three April challengers that earned him the coveted wildcard.

Dmitry Tursunov:  Everyone raised their eyebrows when this fast-court specialist upset David Ferrer on the slow clay of Barcelona.  Building upon that victory and an encouraging hard-court swing, Tursunov avenged a recent loss to Alexandr Dolgopolov by dismissing the seeded Ukrainian in straight sets.  Two of the sets ended in 16-point tiebreaks, a test of the underdog’s nerve that he passed with flying colors.

Rain:  Mother Nature stole the show on Tuesday, thrusting a significant number of matches onto an overloaded schedule of play on Wednesday.  Tournament organizers will hope to keep her at bay for the later rounds.