During the Roland Garros fortnight, a series of daily recaps will highlight the top performers of each day’s action.  Raise a glass of champagne to these terrors of the terre battue!

Frenchmen:  The host nation’s top two men cruised through straight-sets victories, and the slumping Julien Benneteau also notched a fine opening win.  By far the largest headline for the home crowd came from Gael Monfils, though, who weathered a thrilling five-set epic to upset fifth seed Tomas Berdych.  The two men blasted nearly 140 winners through the slow clay court as Monfils blew a two-set lead, flirted with disaster early in the fifth, and then closed a three-tiebreak, four-hour encounter with a flurry of acrobatic forehands at 5-5.

Caroline Wozniacki:  Left for dead in the rubble of a five-match losing streak, Wozniacki brought little confidence to Paris.  Many of us wrote her clay epitaph when she drew British prodigy Laura Robson in the first round.  But Wozniacki handled Robson with ease on the surface least suited to both of them, proving premature those who discounted her.  She could build on that victory with some winnable matches ahead. 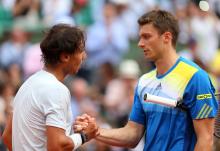 Daniel Brands:  Winning a set from Rafael Nadal at Roland Garros has lain outside the grasp of most men other than the elite.  To the likes of Roger Federer, Novak Djokovic, and Robin Soderling was added the most implausible name of Daniel Brands.  He lit up Philippe Chatrier with explosive serves and forehands for two sets, threatening to place the seven-time Roland Garros champion at serious risk of a first-round upset.  His effort may embolden others by denting Nadal’s aura of invincibility.

WTA top-four seeds:  World No. 2 Maria Sharapova opened her title defense with the sort of crushing victory that she produces in most first-week matches at majors recently.  A bit more surprisingly, world No. 4 Agnieszka Radwanska dropped just two games in her opener, a dramatic improvement from her clay form earlier this year.

Americans:  Despite generally disappointing 2013 campaigns, both John Isner and Ryan Harrison survived the first round at the major least suited to their playing styles.  All five American women in action on Monday also advanced, ranging from veterans like Vania King and Bethanie Mattek-Sands to relative newcomers Varvara Lepchenko and Madison Keys.  Even UCLA tennis star Steve Johnson took Spanish dirt devil Albert Montanes to a fifth set days after the latter had won the Nice title.  All things considered, the fortnight has gotten off to an excellent start for Americans. 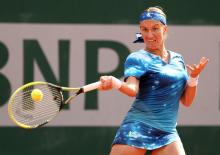 Svetlana Kuznetsova:  Her first-round “upset” over seeded compatriot Ekaterina Makarova should not have come as a real surprise considering her excellent clay resume.  The champion here in 2009, Kuznetsova reached the quarterfinals at the Australian Open and might be considered the favorite from her section to reach the quarterfinals here too.  Neither Wozniacki nor Kerber, the other notable players around her, share her affinity for clay.

Nick Kyrgios:  The raw young Aussie weathered three tiebreaks against wily veteran Radek Stepanek to notch by far the biggest breakthrough of his budding career.  The three tiebreaks totaled 53 points, longer than many sets, yet Kyrgios fought off bundles of set points (including five straight in the second set) to outlast Stepanek.  Aussie fans must have appreciated the good news more than ever considering the swirling Tomic controversy. 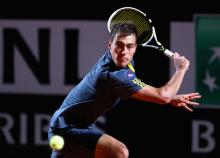 Jerzy Janowicz:  He avenged a loss to Spanish lefty Albert Ramos on Barcelona clay with a straight-sets win, keeping his composure when the match stayed tight through the first two sets.  There’s no doubt that Janowicz has the weapons to succeed on any surface.  If he can hone the mental area of his game, he will become immensely dangerous.

Tommy Robredo:  Unlike compatriot Marcel Granollers, who lost his first match in five sets, Robredo exploited the seeding provided by withdrawals of higher-ranked players.  He cruised through his first match while losing just six games and may fancy his chances to advance further in the section vacated by Berdych.