During the Roland Garros fortnight, a series of daily recaps will highlight the top performers of each day’s action.  Raise a glass of champagne to these terrors of the terre battue!

Serena Williams:  Having lost fourteen total games en route to the Rome title, Serena came to Paris as the clear favorite.  She looked every inch the part in dropping only one game to Anna Tatishvili, erasing the memories of her first-round loss to Razzano here last year.  Serena continues to move as well on the clay as she ever has, constructing points with care and remaining relentlessly focused even when not seriously threatened.

Roger Federer:  Although his outfit looked a bit drab by his usual style standards, Federer’s game sparkled as he dismissed the rising talent Pablo Carreno-Busta in straight sets.  Like Serena, Federer looked crisp in his movement and timing as he struck all of his shots with confidence.  An easy section of the draw lies ahead. 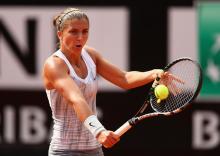 Sara Errani:  She must defend a huge quantity of points from last year’s runner-up performance, but Errani showed not a flicker of nerves in brushing aside her first opponent, Arantxa Rus.  Her top-five status will increase the eyeballs on her this fortnight, a challenge that she looks as ready to meet as her compatriot Francesca Schiavone after winning this title.

Gilles Simon:  No ATP seeds fell on the first day in Paris, contrary to expectations when Simon won just four games in the first two sets against Lleyton Hewitt.  This Frenchman never had rallied from losing the first two sets to win a match at a major, so he created some personal history in achieving the feat on Sunday.  Simon added to the drama by allowing a 5-0 lead to slip away in the final set, squandering two match points in the process, before he closed out the tenacious Aussie with a break at love.

Mallory Burdette:  The young Stanford alum played her first career match at Roland Garros, which itself marked a meaningful moment for her.  Not content just to experience this storied setting for the first time, Burdette defeated the promising teenager Donna Vekic in straight sets.  A rollercoaster riddled with service breaks ended with her fending off two break points in a long deuce game as she successfully served it out.

David Ferrer:  Almost as impressive as Federer, he cruised past Marinko Matosevic with the same sturdy form that carried him to Masters 1000 quarterfinals in Madrid and Rome.  As a top-four seed in the absence of Andy Murray, Ferrer stands positioned to reach a second straight semifinal here.  He often has underachieved at Roland Garros in the past, though, so cautious optimism seems justified.

WTA upset artists:  The most notable headline of the day came when Urszula Radwanska upset fellow “lesser sister” Venus Williams in three sets and over three hours.  A recent back injury combined with her career-long vulnerability on clay undermined the fading older sister of the world No. 1 against the ambitious younger sister of the world No. 4.  Just as remarkable was the upset achieved by Puerto Rican prodigy Monica Puig over top-15 opponent Nadia Petrova.  This second tense three-setter featured a comeback from losing the first set and a terminal break of serve when tennis overtime looked inevitable.