Just before play began on center court, Simona Halep [2] and Garbiñe Muguruza officially withdrew, just in time for the draw to be reseeded.

Halep was still nursing a hip injury she incurred during a Fed Cup match against Caroline Garcia over the weekend. Muguruza was struck by a stomach flu. As the defending champion of Roland Garros, she does not want to take any chances with her health, this early in the clay season. She told press: “if I’m not a hundred percent I don’t want to step on the court. I’m also exhausted mentally because I gave everything for this tie but unfortunately, we couldn’t win. So, that’s why I decided to withdraw because I have to take care of my health first.” 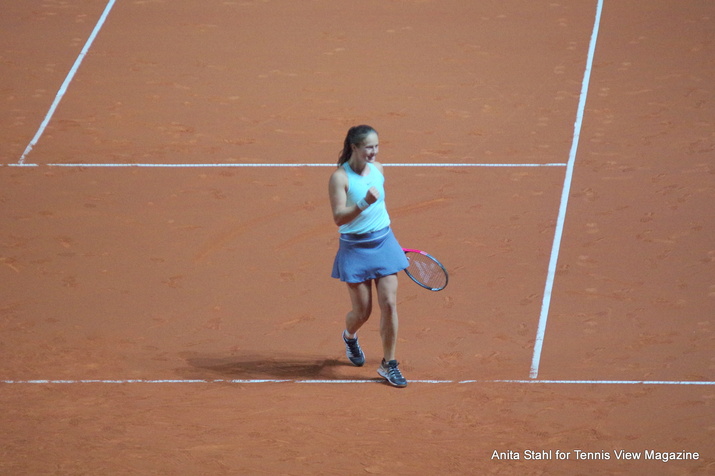 Angelique Kerber [5] took Halep’s place in the bottom of the draw, receiving a first-round bye instead of clashing with Donna Vekic. The new draw must suit Vekic well, who now faces lucky looser Giulia Gatto-Monticone for the first time, instead of the German who won also happens to be a two-time champion of her home tournament.

Kerber can now enjoy a bye in the first round, giving her just a little extra time to recover from a viral illness that has been troubling her. In the second round, she will face the winner of wild card Andrea Petkovic or qualifier Sara Tormo Sorribes.

Muguruza’s spot went to lucky loser Vera Zvonareva, who now faces Victoria Azarenka in the first round. The match will be tough for Azarenka, who has to quickly adjust from the Australian hardcourt she played Fed Cup on over the weekend, to say nothing of the challenges she will face from jetlag. The two have played on ten occasions in the past decade, Zvonareva won six of their encounters. Having played three qualifying matches here already, she will also be better adjusted to the conditions.

In early first-round results, Daria Kasatkina has improved her record at the tournament, where she lost in the first round of both previous attempts, with a 7-6(8), 7-5 victory over Elise Mertens.