Playing at the height of his powers, world No. 1 Novak Djokovic of Serbia dismantled world No. 7 Kevin Anderson of South Africa 6-2, 6-2 in one hour and 15 minutes in the semifinal of the Nitto ATP Finals at the O2 Arena in London. He will face world No. 5 Alexander Zverev of Germany in Sunday’s season finale.

Anderson, who at 6’8” is a beast with his serve, was broken in the first game. It was not a huge surprise. Djokovic, the greatest returner in the sport’s history, has broken all the big servers—Isner, Cilic, Zverev—in his group this week. He’s also been serving incredibly well—he’s not been broken in four matches—and he held easily in the second game, hitting his signature backhand down the line and finishing with an ace to go up 2-love. 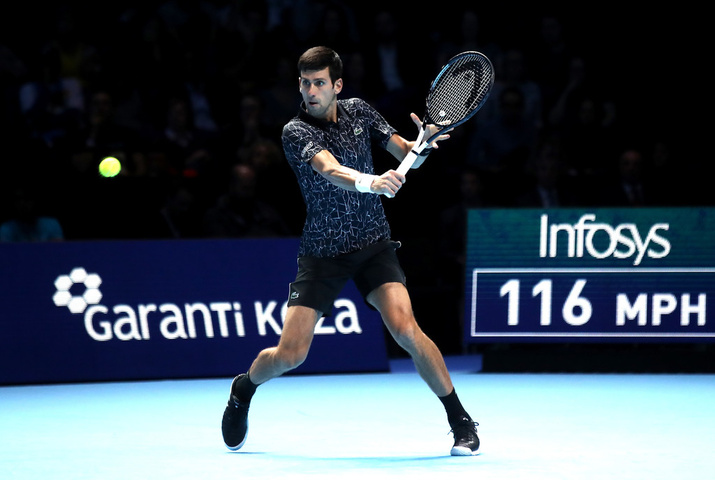 They stayed on serve until 4-2. Anderson was serving, and he got up 30-love with a blistering backhand. He gave one of his positive fist pumps, but then double-faulted and netted a ball. Soon Djokovic, blocking back Anderson’s serves down the middle of the court with ease, had the double break and held to take the first set.

In the second set, Anderson got down quickly in the first game love-40. He hit a good enough serve that Djokovic missed long, but then he netted a backhand after a long rally. Another break for Djokovic.

In the third game, Anderson was serving and missed a routine overhead, but managed to hold by hitting a clutch 136 mph serve out wide. Djokovic also held, hitting a 122-mph ace in the corner.

In the next game, Djokovic made a sublime backhand down the line and also hit an amazing inside-in forehand. Then he let out a primal scream when he got the double break again.

Djokovic was leading 5-2. Anderson was able to hold his next service game. But Djokovic, looking so dominant, held at love for the match, finishing with a forehand volley that tipped the tape of the net.

After his victory, Djokovic said, “I think it was the best match I’ve played so far this week. It came at the right time. Kevin has been playing great tennis this week. He lost serve in the first game, which was big because he relies so much on his serve. I tried to win as many points on his second serve as possible. It worked very well.”