A Dish for All Tastes: Wimbledon Women’s Draw Preview 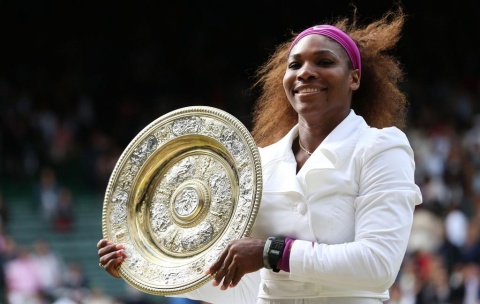 This sequel to the preview of the Wimbledon men’s draw explores what each section of the women’s draw could offer this fortnight.  Read more about the challenges confronting the favorites and some of the most intriguing unseeded women to watch there. 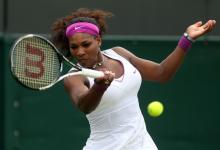 First quarter:  A year ago, Serena Williams reasserted herself as a contender by defeating three elite opponents en route to the title.  Serena’s greatest challenges at Wimbledon 2012 came in the first week from foes relatively unheralded, such as Zheng Jie.  Having taken the American to 8-6 in the third set then, Zheng could get a second chance at her in the second round this year.  The first seed whom Serena could meet reached the quarterfinals in each of her last two Wimbledon appearances, but Tamira Paszek has won only one match this year and retired with an injury at her last tournament.  Sterner resistance to the world No. 1 may come on Manic Monday, when the second week begins.  Then, three-time Wimbledon quarterfinalist Sabine Lisicki might aim to knock off the top seed at this major for the second straight year.  The German’s massive serve first will need to carry her past Samantha Stosur before then, while Elena Vesnina also lurks in this section.  Winning her second title of the year on Saturday, Vesnina defeated Ana Ivanovic and Li Na in Eastbourne with impressive grass-court tennis.

In her first major as a member of the top ten, another Russian will open her tournament against leading British hope Laura Robson.  Maria Kirilenko came within two points of the Wimbledon semifinals last year, surprising in view of her modest first-strike power.  Able to unleash plenty of first strikes, Robson will look to rekindle the memories of marquee upsets over Kim Clijsters and Petra Kvitova at the last two non-clay majors.  The draw should open for the winner with few players in the vicinity who have shone on grass.  At the start of the second week would await 2012 semifinalist Angelique Kerber, but she faces formidable early tests of her own.  Bethanie Mattek-Sands reinvigorated her career this spring on clay and looks to continue that resurgence on a surface more suited to her strengths.  If Kerber denies the American in the first round, former Wimbledon quarterfinalist Kaia Kanepi will offer little respite. 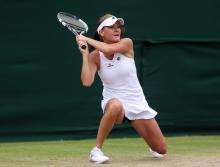 Second quarter:  This most open of the quarters could produce a surprise semifinalist, something that rarely happens in women’s draws at majors these days.  Between the two top-eight women who anchor this section stand a few notable dark horses.  Twice a quarterfinalist and once a semifinalist here, Tsvetana Pironkova leaps off the page as an upset threat for Anastasia Pavlyuchenkova in the first round.  The heavy serve and crisp volleys of Nadia Petrova, more dangerous now in doubles, could propel that veteran through a few rounds.  As she did last year, and as she did at Roland Garros last month, Agnieszka Radwanska could exploit a soft early draw to go further than her recent form suggests.  The world No. 4 fell early in most of her European tournaments this spring, but she reached her only major final to date at Wimbledon last year and excels there more consistently than at any other major.  Note also an intriguing first-round clash pitting home hope Heather Watson against American rising star Madison Keys.

Near the floundering Li Na lurk two women who won titles on grass this month.  While Daniela Hantuchova claimed Birmingham a week ago, Simona Halep extended her winning streak to ten matches by capturing the Dutch Open on Saturday.  Neither woman has left an impact at majors this year, but either could upset a version of Li well below her transcendent form to start the year.  Li also will need to sharpen her focus for a possible Manic Monday  meeting with Roberta Vinci, whose biting slice stays especially low on grass.  The world No. 6 thus eyes a route more difficult than what projected quarterfinal opponent Radwanska will face, so she will have earned her ticket to the second week if she does secure it.  Her previous meetings with Radwanska usually have tilted decisively in one direction or the other with Li’s form dictating the outcome.  Her recent struggles hand the edge to last year’s finalist, although Radwanska has lost seven of her eight career quarterfinals at majors.

Third quarter:  Having inflicted some off-court payback on Serena over the weekend, Maria Sharapova eyes the chance to inflict some on-court payback this week.  The 2004 Wimbledon champion could avenge her notorious US Open debacle against Melanie Oudin in the second round.  Other than Oudin, most of Sharapova’s early opponents fit the model of heavy hitters whom she prefers to play on grass.  But her favorite major has proved less kind to her than most tournaments in recent years, for she has survived Manic Monday just once since 2006.  A third-round meeting with Lucie Safarova might cause concern, for Safarova can dominate behind a formidable lefty serve at her best and extended Sharapova to three sets this spring.  The former champion enjoys the easiest route of any title contender early in the second week, for she never has lost to any of her possible fourth-round opponents, most notably former finalist Marion Bartoli.

Nor should the quarterfinal pose a much greater obstacle for Sharapova.  The fifth-seeded Sara Errani has grabbed only a single headline on grass throughout her career—when she failed to win a point through an entire set at Wimbledon last year.  Unlikely to reach a first quarterfinal there, Errani could fall victim to one of two Americans in Varvara Lepchenko or Sloane Stephens.  Yet a third American in this section offers the nation’s most intriguing storyline in this draw.  The unseeded Jamie Hampton, who opens against Stephens, reached the Eastbourne final as a qualifier last week with victories over two top-eight opponents.  If she halts her countrywoman, a rematch with one of those recent victims could await in the third round.   While Hampton ended Caroline Wozniacki’s week in Eastbourne, a solid effort there may have raised the Dane’s confidence.  A similar boost of morale this month may have made wildcard Andrea Petkovic a threat in this section as she tries to resuscitate her career.

Fourth quarter:  Like Serena and Sharapova, Victoria Azarenka chose rest after Roland Garros rather than match play on grass.  Also like her fellow top-three contenders, her early draw should not punish her for that decision.  Azarenka will have time to find her rhythm and range against the cluster of counterpunchers around her, ranging from Alize Cornet to Jelena Jankovic.  Among the women who could threaten the second seed on an offensively oriented surface, Kirsten Flipkens won a set from her at Indian Wells.  This Belgian’s readiness to attack the net and employ a slice could unsettle Azarenka’s baseline rhythm.  But Flipkens opens her Wimbledon campaign just two days after she played the Dutch Open final, leaving her minimal rest before confronting the strong will and strong lungs of Yulia Putintseva.  In a similar position, Eastbourne semifinalist Yanina Wickmayer hopes that momentum from two top-ten upsets there translates to London. 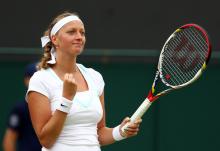 One of the strongest sections in the draw features 2011 champion Petra Kvitova amid a host of imposing shot-makers.  Like Li, Kvitova will have earned her berth in the quarterfinals if she reaches that stage.  After she trades bombs with burly American Coco Vandeweghe in the first round, she must beware of Yaroslava Shvedova.  This underdog nearly upset Serena Williams last year and has troubled the Czech before.  Having defeated Kerber in Eastbourne, Kvitova’s third-round opponent Ekaterina Makarova will fancy her chances of winning a second straight all-lefty battle against one of the top eight.  Nobody other than Serena has defeated Kvitova at Wimbledon in the last three years, though, so she should feel confident despite her thorny path.  That path could grow smoother in the second week as she seeks to outslug Ana Ivanovic and extend a four-match winning streak against Azarenka.  Two of those victories came at Wimbledon.