Dimitrov Comes Back To Stun Medvedev At Indian Wells

The first set was a very Medvedev first set. He frustrated Dimitrov by winning so many of the long rallies. He won 80% of his first serve points and only made five unforced errors.

In the second set, Dimitrov came back from a double break down, hitting some excellent backhand slices, and Medvedev netted a backhand for 4-all.

This is when the momentum of the match totally changed. Medvedev, normally a patient player, lost his focus and made way too many errors. 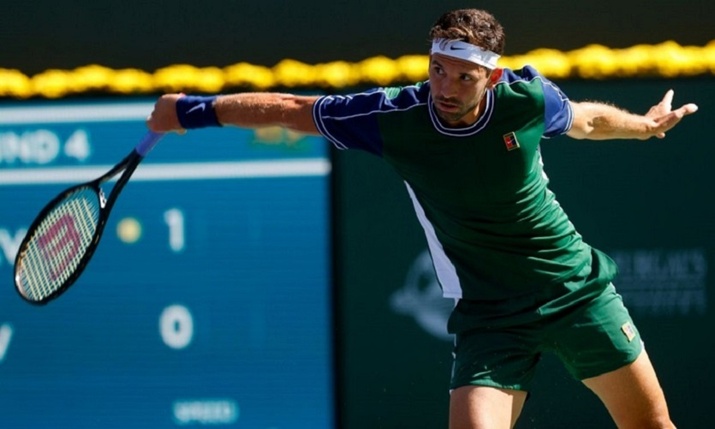 Dimitrov held and took the lead for 5-4. He then broke the Russian at 30 to take the set, after Medvedev netted a volley.

In the third and deciding set, Dimitrov served first and held at love. Medvedev continued to beat himself by getting down 15-40 on his next service game. He won the next point for 30-40, but then double-faulted to give Dimitrov the break. Medvedev, looking out of sorts, had now lost seven straight games.

Dimitrov stayed steady and held at 30 with a sensational forehand cross winner, hit with depth and pace to the corner. The Bulgarian was now up 3-love.

Medvedev played a better next game, making his first serves, and held at thirty, with a 121 mph ace out wide.

Dimitrov, serving at 3-1, hit a blistering forehand winner that caught a sliver of the line and another fantastic forehand inside-out. He held at 15 with a brilliant backhand volley. 4-1.

Medvedev is serving. Dimitrov hits a sublime backhand down the line. Medvedev makes a couple of errors and after missing a first serve by about 10 feet, he smashes his racquet hard on the court, has to get a new racquet, and then hits his second serve wide for a double-fault to lose the game.

Dimitrov, at 5-3, makes his first serves and holds at love, with Medvedev sailing a forehand long on match point.

In his post-match press conference, Medvedev was asked what went awry: “Yeah, I mean, there are three things I want to say, because tennis is not about just one thing. First of all, I mean, I don’t remember myself losing three service games, even four service games ever, I guess, on hard courts. That shows how slow this court is and the conditions, more like clay, I would say, which I don’t like, because to lose four times the serve is just unacceptable. Yeah, that’s why I lost the set.

“Second, I knew that during the day, much tougher to control the ball for me, especially on the serve. That’s what we saw in some moments I couldn’t pass my first serve. That’s why I was asking to play at night, but this time it was not possible because I had a day off where other guys played yesterday and were supposed to play today, so they were playing late at night. That’s completely normal, but I knew it’s not going to advantage me.

“Third thing, Grigor, going to be straightforward, if he plays like this like he did starting from 4-1, he’s going to win the tournament. But let’s see the final result of the tournament.”

In his post-match press conference, Dimitrov was asked how he turned it around: “Yeah, I mean, I don’t know. I guess I stayed in the game. I think it was very important to stay in the game. Been watching quite a bit of his matches. I really wanted to play this match to be completely honest. I think what he has been able to accomplish this past, like, year and a half is pretty amazing. I think it really pushes me also to do better.

“So, yeah, the first two points at 4-1 was where everything started to turn around for me a little bit. I think little by little I was just trying to stay in the game, stay in the moment, and really fight through every opportunity I had. I really had to go for it.

“Of course, at some point I really had to alter my game a little bit to kind of adapt towards the lead, of course. After the second break, was 4-all, then I had a very good service game. Then, yeah, I didn’t expect to break him at 5-4, but I picked up on all the serves he went for. His percentage of the serve dropped a lot. That was giving a lot more looks for me.”

This was only Dimitrov’s third time ever to beat a Top-2 player. He said: “I always wanted to do well out here. I felt like I had so many chances throughout the years. I’ve lost very close matches, matches from match points and everything. In a way, I was very determined to come out in the desert and really give it all I had.”