At 32, Carla Suarez Navarro’s career spans 18-years beginning with the ITF tour in 2003. She has achieved both a WTA No. 6 singles and No. 11 doubles ranking. Tennis has a bad habit of not celebrating those who do not reach the summit, No. 1. Perhaps it is time to rethink that default. Ask any Top-10 player about the intensity of their climb and you will get an earful. Also, consider the odds of making it from the ITF to the WTA tour at 14-years old.

Following her battle with cancer, Carla returned to slam play at Roland Garros. She has now made her final appearance at Wimbledon falling to Ash Barty. (BTW-Thank you Ash for recognizing her.) Carla owns 47 Grand Slam appearances with 7 quarterfinals and 9 round-of-16 finishes. While she does not possess a massive trophy cabinet, her ability to compete with the best, her signature backhand, and her intangible achievements are numerous. 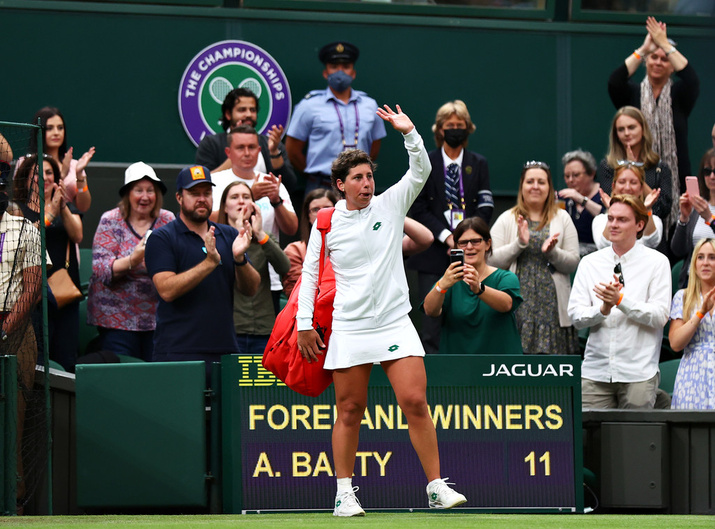 Measuring 5’4, the Spaniard has faced towering opponents her entire career employing shot selection defensive tactics with success. She has battled in the most dominant “Williams Sisters Era” earning wins against the following WTA notables at various career stages of their careers:

Quoting former US Open Champion, Sloane Stephens, “We all love her and love having her around.” Carla has earned the respect and appreciation of her peers. She shared this after receiving support from Halep during her time away, “It’s so special, I’ve known Simona from a long time ago. Also the rest of the players during my treatment, they call me, a lot ask me how I’m feeling. I really feel that respect, it was something positive that gave me a lot of energy.”

Every day, there are fierce debates as to when Serena and Roger will retire. While it is an emotional subject, let us also remember those who have announced their last stand. Carla stated that her final match will be at U. S. Open, a final decision. As the USTA prepares for the grande dame event, I believe the two-time quarter-finalist deserves a curtain call. An accomplished competitor, Carla embodies humble character, tremendous heart, competitive spirit, maximizing potential, and sportsmanship. No matter the outcome, she wears a smile.

Keep in mind, her recent 3-set loss at Wimbledon was to the eventual champion, Ash Barty (post d. Cancer). One wonders how far Carla may have gone if she had the “luck of the draw.” Yet, she did not dwell there. Instead, she was appreciative stating, “Wimbledon make me a really good gift… I am the most happy player on tournament for sure.”

In the Spanish portion of her Wimbledon presser, she broke down in tears. While many players would end it, stop, walk out she carried on. With her heart open on full display, she continued with courage just as she has so many times in difficult moments and especially in coming back from Hodgkin Lymphoma.

Emotion is the diamond of sport. In tennis, career retirements are often “lackluster” missing the mark. This is an opportunity. Despite tradition, retirements ought to be well thought out memorable celebrations. Tennis players devote their lives to the sport. Many start at age 3 or 4. They leave behind not just a career, a tennis family, an entire way of life, and a way of being.

The final moments, a round of applause, a visual career in-review, on-court farewell from peers, a final spotlight, and a chance to address fans, even in defeat, seems fitting.

Let’s take a page from NBA retirements. These celebrations are as much for fans as they are for the player. They create priceless lasting memories endearing fans to the sport. It is a love-filled occasion. Tennis is an individual sport yet without the supporting cast it fails. Is 15-minutes too much to ask for those who have served their sport in an exceptional manner?

Carla will not go down in history as the best on tour, but quoting a fan, “Man I love her.”