Considering The Enigma of Ernests Gulbis

As another service game accelerated from Ernests Gulbis at Queen’s Club on Wednesday, a throwaway comment from a fan slipped down the stands into the ears below: “He doesn't care very much, does he?”

It should be noted that many of the fans here belong to the casual rather than the diehard variety. But still there was something that resonated with those comments. To the naked eye, it certainly appeared the Latvian cared. It took only five games until the rapid vibration of his lungs practically shook the grounds as Gulbis screamed in frustration at one of many missed early break opportunities. It was a scream that came right in the middle of a bipolar streak of equal parts positivity and anger as he battled a deuce game and showcased the ultimate struggle of a tennis player. A point won was followed by a triumphant pump of the fist and by a formidable gaze to his box. A point lost brought a furious rant in the direction of his two-man team. 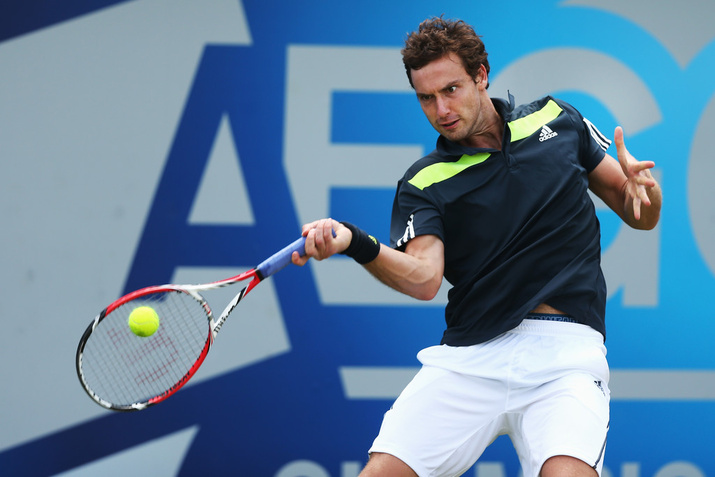 Gulbis also appeared to care as the fury from his performance sent an untouchable assortment of expletives into the atmosphere. As he struggled with his trademark sky-scraping forehand on the low-bouncing turf, the cursing rapidly rose to a crescendo so grand that a linesperson decided to consult the umpire and skipped off to the chair . As she returned from informing on him, still incensed, the Latvian quipped, “You should work for the KGB.”

The fan may well have been wrong in the context, but the idea that Gulbis cares little off the court, in front of the media and while dropping his usual colorful quotes, is quite the popular one. That's what people believe. That's what he says. It is uttered every time one of his special quotes zooms across the internet.

Beneath it, though, there's a disconnect. The story has been told a thousand times by now. Last year at Roland Garros, Ernests Gulbis, the self-appointed press conference police, took the top boys to task over the boring uniformity of their comments in press. A day later, one by one, the top players were dragged into the press room to answer his charges.

He had a point of course, and throwing up the issue once certainly appeared quite fair. The problem is that it hasn't been just once. As Gulbis stepped foot in the USA last summer, the story flew up again, and it was down to him to recount it. In Asia too. A year later at this year's French Open, in the middle of what would become his career-best run, he was scooted into the ITV TV set to field questions. Before long, he was talking about just how interesting he was compared to the rest of his rivals. This week has seen no difference as the BBC got hold of him and he was rapidly back on the horse again.

“I think everybody is trying to be too nice,” said Gulbis. “I understand, but somebody has to do something about it.”

Of course, Gulbis holds no power over the questions asked of him. But it's difficult not to detect the self-congratulating pride in his voice every time he is offered a new chance to tell the world how boring and overly nice those top players are. This is in dramatic contrast, of course, to his unadulterated fabulousness. There's a lot of effort there for someone who doesn't really care.