It was an emotional win for the Spaniard, underlining once again that he is one of the greatest competitors in any sport.

In the first set, though there was spectacular shotmaking from Sock, especially on the forehand side, which has as much heavy topspin as Nadal’s forehand, Nadal was able to break at 3-2 with a forehand of his own, a terrific pass crosscourt for a winner.

Nadal serving at 4-2 felt like another big game. Rafa led 30-15 and hit an ace out wide for 40-15. But Sock got the game back to deuce. Then Rafa, closing the net, finished the point with a fantastic forehand volley. Sock, in desperation, slung his racquet toward the ball, letting it loose from his hand so much that the racquet skipped across the court.

In the second set, Nadal served first and held with his favorite shot: a ferocious spin-heavy inside-out forehand. Sock held in the next game with a crushing forehand and a fantastic serve down the T.

They stayed on serve until 3-all, and with the help of a double fault from Nadal and a massive forehand down-the-line winner by Sock, the American broke. With three more massive forehand winners, Sock held at 15 for 5-3. 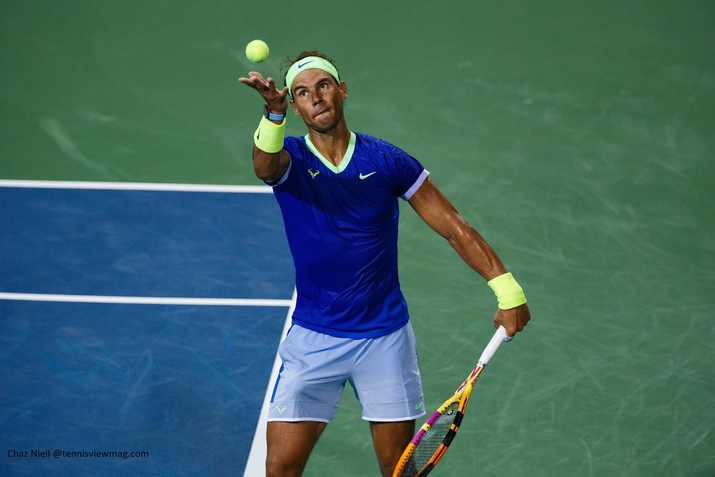 In Nadal’s next service game, Sock had two break points, but failed to convert. In his next service game, on his third set point, Sock held at 30. At one point, the video screen flashed that it was match point, which seemed to cause anxiety to the mostly pro-Nadal crowd. But no need to worry, we were going to a third.

In the third set, Sock broke in the first game and stayed steady, taking a 3-1 lead. Nadal, as ever, stayed gritty and broke back for 3-all. They stayed on serve. At 5-all, Nadal held at love. At 5-6, Sock held at love.

You could see that Nadal with struggling physically, hobbling a bit. After the clay season, he struggled with a foot injury, and he seemed to be suffering with that injury again.

But in the tiebreaker, Nadal played magical tennis. His first five points were sublime, and he led 5-love. The crowd was roaring. Rafa lost only one point, taking the buster 7-1.

After the match, in his press conference, Nadal said: “Well, have been a beautiful night in terms of energy, in term of the crowd have been amazing. Yeah, the support of the city since I arrived here is one of the most that I ever had in my career, no? Yeah, super happy to visit Washington and to play here for the first time.

“The match wasn’t easy. I think I started more or less well the first set. Then I played a bad game in the second. It’s true that when the match was coming, my foot was coming, too. I started to suffer a little bit too much. 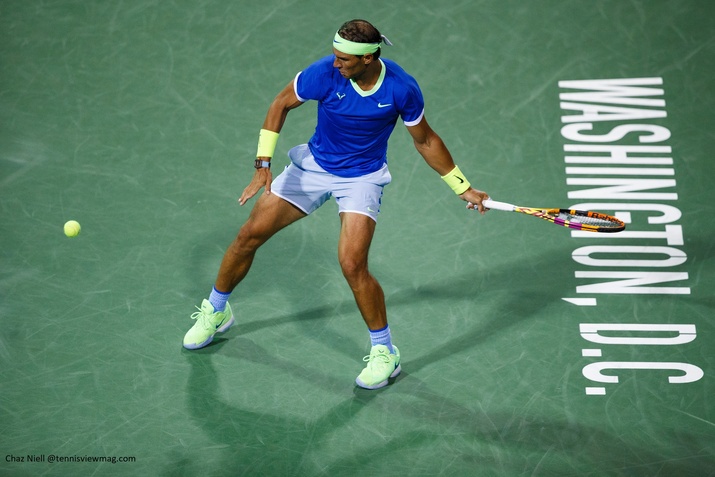 “But I finished the match playing better. That’s important. I hope to be ready for tomorrow.”

Nadal added: “I think my serve could be better. For moments the percentage have been too low. Then you open the door to a player like him. Of course, as I said before, no, is not easy to play against Jack, but at the same time he create damage. But he has some mistakes, too, no?

“Is important to stay solid. Is important to let him play from a difficult positions. I think is something that I didn’t made that happen for too much time during the match, no?

“But here I am. I fighted. I am able to play again tomorrow, so that’s a great news.”

Next up for Nadal is Lloyd Harris, the 14th seed, from South Africa.