In their first meeting, on a hot and breezy Thursday afternoon, at the Western & Southern Open in Mason, Ohio, 21-year-old qualifier Andrey Rublev of Russia stunned seven-time champion and 20-time Grand Slam champion Roger Federer 6-3, 6-4 in just over an hour.

The victory gives Rublev his second Top 5 win in a month. He upset world No. 4 Dominic Thiem en route to the Hamburg final a month ago.

Rublev served amazingly well, hitting five aces; absolutely crushed both his forehand and backhand; and showed deft touch at the net. He broke Federer in his first service game and then two more times in the match. 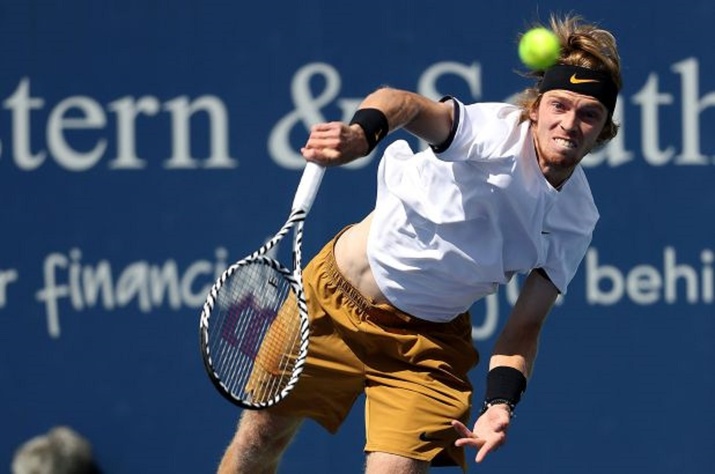 In his post-match press conference, Federer said of Rublev: “I thought he played very well. Definitely I think I struggled on my serve early on. Got broken the first service games, and, you know, there you have it. That sort of set the tone for the match maybe a little bit.

“But at the same time, you know, I think the combination was tough. He was playing well. I was maybe struggling especially on the offensive, because overall I didn’t think I was feeling the ball badly. It’s just, you know, sort of fast-court conditions, and, you know, when you sometimes then can’t rely on that serve to go or on the one-two punch, which I didn’t think was excellent today from my side, you need an opponent that maybe lets you get by some tougher moments, but he didn’t do that.

“He was super clean. Defense, offense, serving well. Didn’t give me anything. He was everywhere. So it was tough for me, but excellent match by him. I was impressed.”

Federer said of the conditions: “Day sessions are quick. There is a breeze. The heat makes the ball super jumpy and bouncy and fast. So that’s where you want to be good on the offensive.

“And if you’re seeking to look for rhythm against certain players, you’re not going to get it, just because they are able to control the outcome of the rallies. And he’s exactly that kind of player, Rublev, where he can take the racquet out of your hand.

“Yeah, I mean, day sessions are always tough, you know, in North America on the hard courts, because with the heat, the ball just goes, you know. I like those conditions, though. So that’s a pity today.”