In the first round of the Western & Southern Open in Cincinnati, on Court 11, an intimate court near the practice courts, qualifier and NextGen star Andrey Rublev of Russia defeated the fifteenth-seeded Nikoloz Basilashvili of Georgia 6-7 (4), 6-4, 6-2.

It was a big win for the Russian. Just last month he lost to Basilashvili in the final in Hamburg on clay, and in January he lost to him in the round of sixteen in Doha on hard court.

Rublev has been ranked as high as world No. 31 but has struggled with injuries over the past year and a half. He missed three months last year because of a lower back stress fracture, and he was out for six weeks this year with a wrist injury. 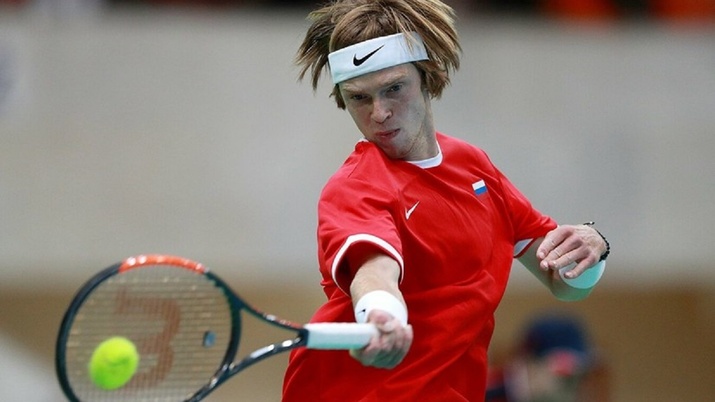 In a recent post in Noah Rubin’s “Behind the Racquet,” Rublev was open and honest about how he felt while out of competition: “I missed the sport so much and all I wanted to do was compete. I clearly remember nothing else at the time was making me happy. It truly was one of the toughest moments of my career. I was born to compete and now I couldn’t and that’s where moments of depression came from.”

It was the eighth time this season Rublev came back after losing the first set. The Russian served incredibly well, with 16 aces, and was not broken the entire match.

In the second set at 4-all, Rublev broke at love with a crushing inside-out forehand. He looked focused and confident. He then held at love, with two great wide serves and another flamethrower forehand.

In the third set, Basilashvili served first and won the first point with a punishing down-the-line backhand. Rublev responded, winning the next point with an amazing backhand crosscourt, turning defense into offense. Basilashvili held with an ace down the T and a backhand crosscourt winner. They stayed on serve until 2-all, when Rublev was able to break when the Georgian whiffed a backhand wide and missed another backhand long.

Though there was hard-hitting and clean ball striking by both players, you could feel the frustration from Basilashvili and all the momentum with Rublev. In the final game, Rublev won in decisive fashion: the first point Basilashvili went for it and missed on a forehand return; the second Rublev hit a huge serve to the backhand that was unreturnable; the third he hit an ace out wide; and the fourth an ace down the T.

Next up for Rublev is Stan Wawrinka, who won in a three-set thriller over Grigor Dimitrov. But you get the feeling that Rublev, who ended his “Behind the Racquet” post by saying, “It made me want to be on court more than anything,” will be happy to compete and embrace the opportunity for a win against the three-time Grand Slam winner.