Caroline Wozniacki: Sunshine Through the Rain

NEW HAVEN, Conn. – The New Haven Open may have been hit by a rash of retirements as play began on Monday, but the WTA’s final warm-up event before the US Open hopes to restore order during its first night session. Caroline Wozniacki, a former world No. 1 and undisputed Queen of the Yale Bowl, will begin her quest for a fifth title in the last six years against the dangerous Chinesewoman, Peng Shuai.

Although she arrived an hour after the formal All-Access Hour concluded, it seemed fitting that the New Haven Open was treated to an “All-Caroline Hour” at the tournament that she considers “a second home.” 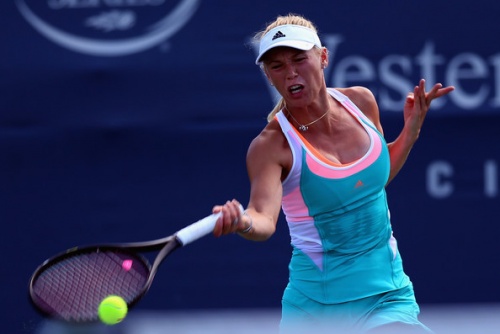 “I love coming back here, I’ve played well here in the past. It’s just such a nice event to come back to. The crowd is nice, the court suits me well…the atmosphere of the tournament is very good,” says the Dane, who has compiled an astounding 20-1 record at the Connecticut Tennis Center, the one loss being a retirement against Maria Kirilenko last year.

Wozniacki is clearly comfortable at this event, and she has used it as a springboard to reach the US Open final in 2009 and two semifinals in 2010 and 2011. Her 2013 season has been a mixed bag, the highlight being a run to the final of Indian Wells. But after pushing world No. 2 Victoria Azarenka in a tight match last week in Cincinnati, the Dane feels confident that she can capitalize on her good form.

Wozniacki said, “The standard and level of women’s tennis at the moment is very high. Small things make the difference and sometimes it’s one, two points in the match that change whether you win or lose…I feel like I’m a better player now than I was a few years ago, but there are so many things that play into it: you need to be healthy, sometimes you’ve got to run. It’s such a mental game as well and it’s not easy to be at the top all the time.”

As a player who made a name for herself with her outstanding level of consistency, Wozniacki appeared relieved to be injury-free, especially after her Wimbledon campaign was derailed by a twisted ankle. But the Dane has learned to deal with aches and pains and has retained a positive outlook through her struggles since losing the top spot in the WTA rankings.

“They say sport is healthy, but some of it, I’m not so sure! We are out there pushing our bodies to the limit every day, that’s why you need really good recovery, good treatments and do a lot of fitness because you need to protect your body from all that hammering that it gets. But, the way I see it now, I always laugh about it because the day I wake up and nothing hurts I should be a little bit scared because it might mean that I’m dead!”

The Dane remained in high spirits for the duration of the press conference, fending off more than a few uncomfortable questions about her ranking and whether she can win a major. When informed that “talk” was that her window of opportunity might be closing, she quipped, “I didn’t really know that there were talks. I think I can beat anyone if I play well. To win a tournament, you have to beat the player on the other side of the net and it doesn’t matter what ranking you have.”

There is a temptation in the tennis media, or even among tennis fans, to oversimplify a player. Take one on-court tantrum, or a couple of funny press conferences, and suddenly that player is either a curmudgeonly brat or, as Wozniacki was once known, as a ray of sunshine. At least in the case of the former world No. 1, she may not be an entirely carefree young woman, but from her comments yesterday, it was clear that she is proud of her accomplishments and is not driven by a need to please anyone besides herself.