This sequel to the men’s draw preview breaks down each bracket in the US Open women’s draw, one quarter at a time.

First quarter:  Defending champion Serena Williams seeks her fifth title at the US Open, the scene of drama good and bad for her over the last several years.  This tournament may define her 2013 campaign for better or worse, since she has bookended a Roland Garros title with early exits at the Australian Open and Wimbledon.  Serena opens her title defense against a fellow major champion in Francesca Schiavone, one of the American’s victims at the Rogers Cup this summer.  Washington champion Magdalena Rybarikova compiled a strong US Open Series and will look to outslug Yaroslava Shvedova to set up a third-round meeting with Serena.  All of the top three American women hover in this eighth of the draw, where Sloane Stephens must solve Jamie Hampton to reach the second week at her home major for the first time.  A victory for Stephens  would offer Serena the chance to avenge a loss in an Australian Open quarterfinal this year.

For reasons best known to the draw gods, Serena’s sister opens against Kirsten Flipkens for the second time in three tournaments.  Venus Williams raced to a fast start against Flipkens at the Rogers Cup, only to let the Wimbledon semifinalist overtake her.  A generally soft section could feature a rematch of a tense Wimbledon battle between Kaia Kanepi and Angelique Kerber, the latter of whom could drop out of the top 10 soon if her skid continues.  Troubled by a back injury, Kanepi has not played since then.  In addition to Canadian prodigy Eugenie Bouchard, American youngster Lauren Davis hopes to make her mark.  Davis defeated Svetlana Kuznetsova twice this summer and took a set from Li Na in Cincinnati, but she will need patience to overcome the steady Carla Suarez Navarro in her opener. 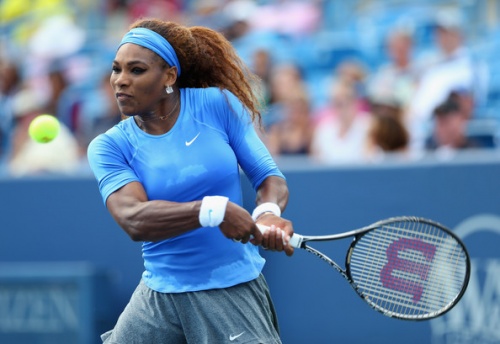 Second quarter:  Recently attending the funeral of her grandfather in Poland, Agnieszka Radwanska may not have her mind fully focused on tennis in New York.  Fortunately for her, she has received a route with plenty of breathing room to settle into the tournament.   A group of wildcards and Spanish clay specialists separate her from Anastasia Pavlyuchenkova, who received a seed when Maria Sharapova withdrew.  The two wildcards stand at opposite ends of the age spectrum and the world, Carlsbad semifinalist Virginie Razzano hailing from France and precocious teen Ashleigh Barty from Australia.  While Pavlyuchenkova has won two titles this year, she has struggled to find traction in early rounds and will face spirited resistance in Razzano.  No test of such strength may await Radwanska until the second week, when Wimbledon runner-up Sabine Lisicki will aim to vault the Pole for the second straight major.

Back to the edge of the top 10, 2008 runner-up Jelena Jankovic reached semifinals at two key American tournaments this year in Miami and Cincinnati.  Service breaks proliferate in the Serb’s matches, perhaps a dangerous sign against the accomplished serve of Madison Keys.  But this  future star struggled with a shoulder injury in recent weeks, and she will enter New York rusty at best.  Scraping off her own rust during the US Open Series, Alisa Kleybanova appears at a major for the first time since the 2011 Australian Open.  The draw has sprinkled promising youngsters throughout this section, such as Rogers Cup finalist Sorana Cirstea and British lefty Laura Robson.  Making her debut as a seed at a major, Robson can set up a third-round meeting with Li Na.  The Chinese fifth seed fell to Robson at last year’s US Open but reached consecutive Premier Five semifinals this summer at Toronto and Cincinnati. 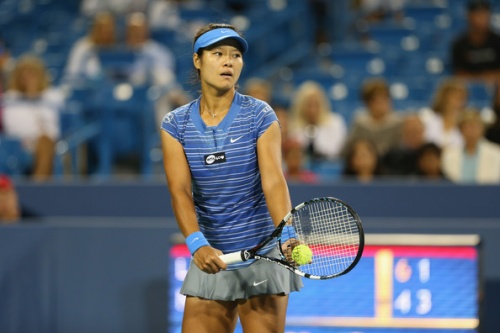 Third quarter:  Like the third quarter of the men’s draw, the third quarter of the women’s draw contains no clear favorite.  Opportunity knocks most of all for sixth seed and 2009 finalist Caroline Wozniacki.  The former No. 1 produced encouraging form over the last two weeks in Cincinnati and New Haven, which she could parlay without much trouble into a second-week appearance or better.  No heavy hitters lurk here to rip the racket out of Wozniacki’s hands, so her consistency can outlast players like Klara Zakopalova or Elena Vesnina.  A quarterfinalist at the US Open last fall, Roberta Vinci adds some distinctive wrinkles that might disrupt Wozniacki’s rhythm.

One reason why Wozniacki seems a good choice for a deep run lies in the ongoing slump endured by fourth seed Sara Errani.  Defending semifinal points in New York, Errani hopes to improve on her first-round loss at the Australian Open.  She may not escape mercurial 2004 champion Svetlana Kuznetsova in the third round, although Kuznetsova dipped sharply in form from the first half to the second.  Two NCAA stars with Stanford degrees add intrigue to the section.  While Nicole Gibbs needs more experience to topple the veterans around her, Mallory Burdette might have a chance to challenge Kuznetsova despite the latter’s credentials.  On paper, though, the Russian remains the favorite to reach the quarterfinals from this section.  Compatriot Maria Kirilenko has lost all four of their hard-court meetings, and Simona Halep never has impressed at majors despite her exploits at non-majors. 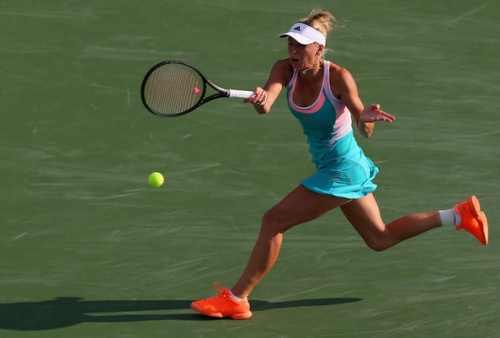 Fourth quarter:  The strengths are very strong and the weaknesses very weak in a section with four major champions and six qualifiers.   While she reached a Premier final in Carlsbad and won a Premier Five title in Cincinnati, Victoria Azarenka never found her best form at either event.  She will have plenty of time to search for it in New York, where she faces no first-week opponent more formidable than the mentally fallible Alize Cornet.  Also mentally fallible but far more accomplished, former No. 1 Ana Ivanovic seeks to carve her way past an odd assortment of players to reach Azarenka in the second week.  Among the women in Ivanovic’s path is Stanford champion Dominika Cibulkova, who lost to the Serb in Carlsbad.  Cibulkova admitted to competitive fatigue in New Haven after her busy summer, so a more credible challenge to Ivanovic may come from one of two home hopes.  Lefty Varvara Lepchenko could meet her in the second round, when Christina McHale encounters Cibulkova.

Some WTA rivalries seem to repeat on an endless loop, while others lie dormant for months or even years.  In the latter category lies the matchup between Azarenka and Petra Kvitova, never on the same court since 2011.  Kvitova won all of their meetings that year, when she conquered Wimbledon, but her 51 three-setters in 2012-13 illustrate her struggles with consistency since then.  Another three-setter might await against Andrea Petkovic, whose confidence has begun to resurface.  The three American wildcards in this section may feel overshadowed by the seeds around them, all heavy servers.  Still, Mona Barthel and Nadia Petrova have sagged this year in the wake of strong 2012 campaigns.  Enigmatic 2011 champion Samantha Stosur won Carlsbad last month amid a generally disappointing season.  Perhaps returning to the scene of her greatest triumph will invigorate her. 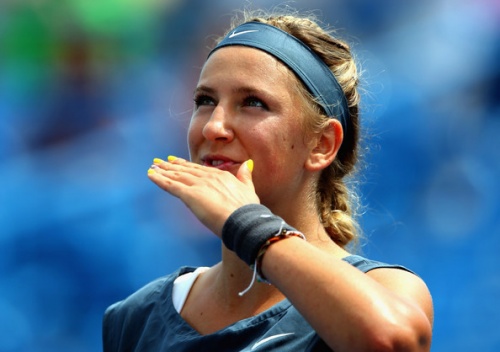