On Sunday in Rotterdam, 21-year-old Felix Auger-Aliassime could do no wrong.

In the first game, Auger-Aliassime had an ideal start, breaking Tsistsipas by rushing him with powerful forehands off the return.

In the second set, 5-1, first point, he was jammed returning the first serve, but still managed to hit a winner crosscourt with an inside-out backhand. 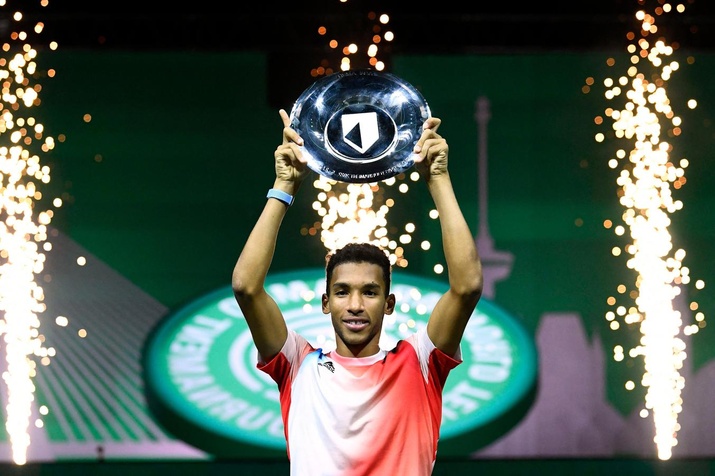 In the second set, 5-2, first point, he hit a backhand open stance down-the-line winner off Tsitsipas’s approach. The Greek took a long look in disbelief.

The Canadian then held at love to win his first ATP Tour title, after coming up short in eight previous finals.

Celebrating, he held his arms up, bowed to the ground, dropped his racquet. He then shook Tsitsipas’s hand and the umpire’s hand. Finally, roaring, he leapt into the air with a fist pump, before hugging his mother and coach and Facetiming with his father, who is a coach back in Quebec.

In his press conference after the match, Auger-Aliassime said: “I played one of my best matches this week, probably. Couldn’t have asked for a better way to win the title, especially against a player like Stefanos, to be able to win comfortably in a way with the score, and to be able to serve that well and to dominate.

“It was a special match, for sure, one that I will remember for a long time. And to get my first title with that. It’s a special day for me, something that I’ve been thinking about and working towards for a while now, for the last couple of years since I’m on the tour. And now finally the day comes. It’s surely the most special day in my career.”

In his press conference after the match, Tsitsipas said: “He was playing very good tennis. He was able to produce some good shots and serving incredibly well throughout the whole match. I wasn’t able to respond.

“I just felt mentally drained. I wasn’t able to serve well at all today. My percentages were so low. I feel like I played a lot of tennis this week, and it kind of came out in that match.

“Not to take anything away from him. He played very well. He didn’t really give me anything to fight back.”

Auger-Aliassime said: “I think looking back in my career, I think Rotterdam will always have a special place. You know, there’s only one first title. And it came here. Actually, I’ve had a great relationship with the tournament, with the fans here. I played my first ATP main draw here, so it’s a kind of a special story that I’ll be able to have for me.

“It’s a big relief, more than anything. Of course, I’m happy. But I think that the relief is even bigger. Just because, I mean, I heard about it many times, trust me. And it’s not easy. You know, it’s not easy. I’m human after all. I’m like all of you guys. I live the same emotions that everybody does. I have doubts, I have fears at times. I stress, like everybody. But I try to do my best.

“So definitely now it’s just a big relief to not have to hear about these finals anymore. About not winning a title. For sure, I think on top of everything, it’s the biggest thing. It’s the relief that I can have now. Now I can just play even more freely when it comes to these last matches in the tournament, those finals in the future. I can even free myself even more, I think.”