The Art of the Slide

By Van Sias in Strokes and Strategy

That need for excellent movement is best exemplified by having the ability to “slide” around the courts.

The game’s natural sliders—players such as Rafael Nadal and Roger Federer among the men and Kim Clijsters and Francesca Schiavone for the women—make it seem as no ball can be hit out of their reach on a clay court.

“Your footwork and balance on clay are probably more important than on any other surface,” says longtime coach Nick Bollettieri, who has seen a number of his pupils past and present—from Monica Seles to Andre Agassi to Jelena Jankovic—post solid clay‐court results.

Embrace the fact that the ball kicks up into their strike zone enough for them to put their opponents on the run.

In the men’s game, sliding is a crucial element, but perhaps not as much on the women’s side when it comes to contending for the biggest clay court event of them all.

“If you’re a man, there’s no way you can win the French Open if you don’t slide,” says three-time Roland Garros champion Mats Wilander. In the women’s game, “I think you can win the French Open behind ball-striking and not sliding as much.” And with the way professional tennis has evolved, sliding isn’t just restricted to clay courts. It’s in play more when stretching wide for shots hit in excess of 100 miles per hour on both grass and hard courts. But clay is perhaps the most effective surface to utilize the method effectively, which is as much a part of playing the game on the dirt as hitting with heavy topspin.

TO SLIDE OR MAKE OTHERS SLIDE?

A contrasting thought to the importance of the slide develops when looking at style of play. The players who grew up building their games on the dirt but have a more imposing style likely won’t be found running and sliding from side to side. On the men’s side, Robin Soderling reached the finals of the French Open in 2009 and ’10, shocking Nadal and Federer in back-to-back years, respectively. Juan Martin del Potro and Tomas Berdych—recent French Open semifinalists—also embrace the fact that the ball kicks up into their strike zone enough for them to put their opponents on the run.

They all slide but use the conditions to their advantage as seen in Soderling’s two runner-up performances. “I think the difference with him is when the courts were fast, the conditions suited him because he has such a big game, and when the courts were heavy, that suited him because he’s so strong and was able to dictate the rallies,” Wilander says. “The big guys are more powerful, they’re not on the defense as much as someone that’s not as offensive with their groundstrokes. The defensive player is going to cover more ground than the offensive player,” Bollettieri says.

And there is evidence of that offensive mindset paying off in the past when it comes to capturing the grand prize: Ivan Lendl won three French Opens in the 1980s, using punishing groundstrokes to lift him to the title. Another example is Jim Courier, the current captain of the U. S. Davis Cup team, who won consecutive French Opens in the early-1990s. On the way to his second title in 1992, Courier defeated six players who developed their games on clay, with Thomas Muster, Andrei Medvedev and Goran Ivanisevic among his opponents.

Being able to power through the ball has its benefits, and according to Bollettieri, slower conditions—say if it’s raining—help offset the necessity to slide. “When the court is wet, the granules don’t move around as much and your footing is a lot better. The sliding tends to be done a lot more when the court is dry and the wind has taken off a lot of the surface,” he said. “But when the courts are wet and damp, you don’t see as much sliding.” And offensive players do well to hold their ground. “Anytime you’re going to be offensive, I don’t think  sliding is necessarily a good thing,” Wilander says. “I don’t think sliding will be ever used in an offensive way. It’s more of when you’re in a defensive position.” 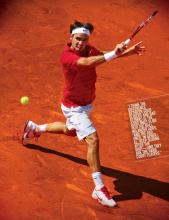 While Americans winning tournaments on European red clay has become a rarity in recent years, that hasn’t always been the case. Aside from Courier, Serena Williams, Michael Chang and Andre Agassi all won French Open titles, while Pete Sampras and Venus Williams are former Italian Open champion. The fact that Chang, Sampras and the Williams sisters—each of whom essentially learned the game on hard courts in California—were able to find success abroad on the clay is testament to their athleticism, as well as their tennis talent. But it seems Americans have run into some problems competing in claycourt tournaments outside the U. S. Case in point: The only active American men to win events on non-U. S. soil in the 2000s are Andy Roddick and Sam Querrey. For the women, the last American to win outside the U. S. was Meghann Shaughnessy in Barcelona, Spain, in 2007.

While it wouldn’t seem much could prohibit top players from winning a title under those conditions, little things like footwork make a huge difference, particularly if the person on the other side of the net has been playing on clay from the start. “Those that are brought up on clay, they’ve been doing this from the time they started striking the ball,” Bollettieri says of the more graceful sliders. “When you go up against guys that were brought up on hard courts, they’re more reluctant because it isn’t part of their game.”

“I think the difference between good sliders and bad sliders is the good ones slide into the ball,” Wilander adds, “and the bad ones, in general, keep sliding after the shot—and they are the hard court players.”

However, there have been some signs of improved play and movement. The U. S. Davis Cup team, led by Mardy Fish and John Isner, famously upset the Swiss squad led by Federer and Stanislas Wawrinka in Switzerland on red clay earlier this year. On paper, the Americans were heavy underdogs, but playing an attacking style helped lead them to the win.

While some players find it difficult attimes to move on the clay, for others it’s pulled off with ease. “Roger Federer and Rafa Nadal would be the ones that stand out as beautiful sliders on the clay courts today,” Wilander says. And among the women, “Francesca Schiavone is easily the best slider among the women since Justine Henin quit,” he adds. “The reason why she does well on clay is because she’s able to hit a shot, and as soon as she hits it, she’s able to recover. She buys time by sliding into the shot and sliding up to the shot—you have to hit a much bigger shot to get it past her.”