AO2019: Nadal, Kerber Breeze Into The Second Round

A lot of question marks surrounded Rafael Nadal entering the 2019 Australian Open. The Spaniard has struggled with injury since withdrawing from the US Open and had offseason surgery on his foot to remove spurs. And in the offseason, he turned his focus on making his serve more of a weapon. But in his first match of the Australian Open, the second-seed earned a routine 6-4, 6-3, 7-5 victory against Australian James Duckworth who fought until the end.

Early in the match, Nadal took advantage of a weak service game by the Australian and followed by routinely holding throughout the first set. But Duckworth began to settle in, and his serve earned him some easy points. Early in the second set, he broke Nadal to gain the advantage. But that was short-lived as Nadal quickly struck back and began to make inroads into the aggressive Duckworth serve. After seizing control, benefitting from some double faults and finally measuring Duckworth’s serve, he took the second set. 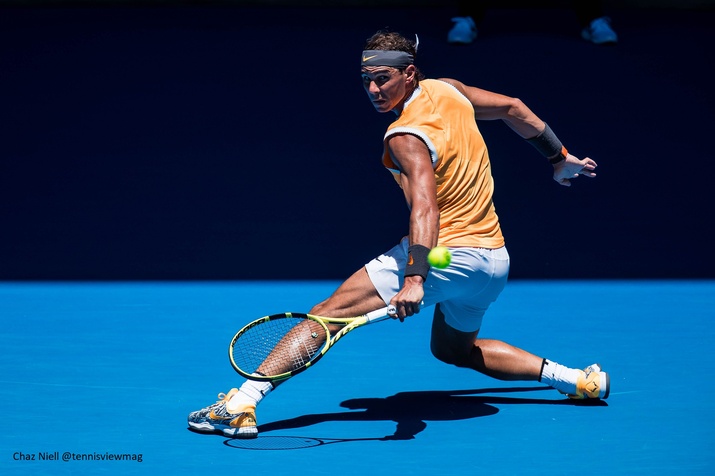 Nadal gained full control in the third set as he broke Duckworth to gain a 4-2 advantage behind some phenomenal shot-making. However, Duckworth, known for his fighting mentality, would continue to battle and gained a service break of his own but he could not fight off Nadal who closed out the match.

“Not easy to come back after a lot of months, especially against a player playing super aggressive on every point,” said the 2009 Australian champion. “The energy I feel in this place is fantastic,” he said.

Meanwhile, 2nd-seeded Angelique Kerber moved through to the second round with a 6-2, 6-2 win over Polona Hercog. The German came into Melbourne in fine form and as wide open as the women’s draw is, has been labeled by many as the favorite at a tournament she has struck gold at before.

On Monday, the German put on a clinic with her groundstrokes putting pressure on the Slovenian throughout the match. She breezed in the first set in just 38 minutes.

Despite the ability to pressure the 3-time grand slam champion some in the second set, the result was the same as Kerber snuffed out any attempts to make an impact.

Kerber looked comfortable at the place she won her first major title three years ago. “Every time I walk on this court, I have great memories and such a special feeling, I really enjoy playing here,” she said.

She will face Beatriz Haddad Maia of Brazil in the next round.