In the quarterfinals of the Australian Open, in a battle of two Americans, Jennifer Brady, age 25, seeded twenty-two, dismissed her good friend, unseeded Jessica Pegula, age 26, in three sets, 4-6, 6-2, 6-1.

This will be the second Slam semifinal for Brady. She was also a semifinalist at the 2020 US Open.

Though there were no fans to watch them on Rod Laver Arena because of the recent five-day lockdown in Melbourne, the match had been hoped for by both women.

After their previous victories, they had each written on the on-court camera lens—normally players just sign their name—a message for the other. 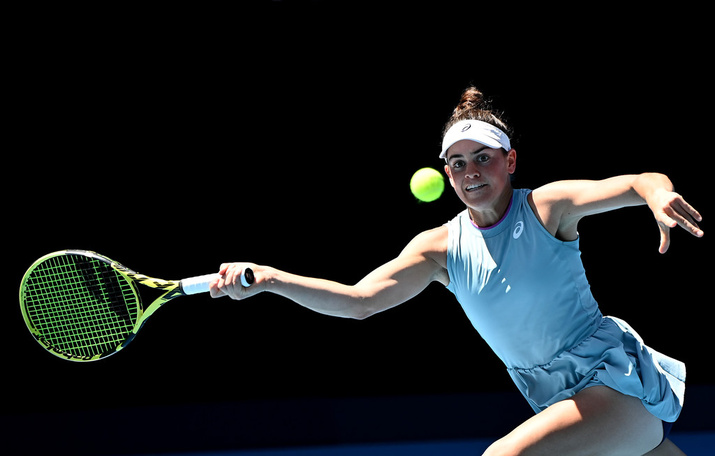 Jennifer Brady had been one of the players in the hard lockdown before the tournament began. “A lot of people were complaining and I told myself I wasn’t going to complain,” she said. “I mean, there’s way worse things going on in the world than me being stuck in a hotel room for 14 days. We weren’t the only ones doing hard lockdown. Every Australian that comes home has to do the hard lockdown. [I was] just trying to stay as positive as possible.”

Brady plays an all-court game, with good volleys, powerful groundstrokes, especially her forehand, and an excellent serve, which has tremendous topspin.

Pegula has a smooth game, with a good feel for where the ball is going. She is both aggressive and steady, with a willingness to hit that one extra ball to stay in the long rallies.

In the first set, Brady served first and held as expected. Pegula then held and broke at love. 3-1. They each held for 4-2, but Pegula was dictating and hitting with more depth.

In the seventh game, Brady’s serve was back on song, and she served four aces for 3-4, and with that momentum, she broke for 4-all.

But Brady started making errors again and was broken, while Pegula stayed aggressively steady, serving out the set with confidence.

In the second set, Brady settled down and got up 3-love. She played with more freedom and less tension.

Pegula, though, fought back, holding and breaking with a beautiful inside-out forehand winner. At 2-3, Pegula was serving, and Brady broke in that key game with a terrific bouncing overhead.

At 4-2, Brady held at love and then broke at love, taking the set, aided by a double fault from Pegula.

In the deciding set, Brady hit a scintillating backhand winner, and her confidence soared. She out-rallied Pegula in a 21-shot rally. Pegula’s footwork started to look a step slow. Brady hit an astonishing forehand down the line for 4-1.

Pegula, collapsing on her serve, screamed out to her coach: “What am I doing wrong on my serve?”

At 5-1, Brady served out the match with an ace down the T, her seventh ace.

Pegula had no aces in the match.

Afterward, Pegula said: “That I couldn’t win any free points on my first serve and my percentage dropped was to me the match basically. Then it kind of just spiraled from there.”

In her on-court interview, Brady said of Pegula: “We’re such good friends. I’m really happy for her success. I know that we’ll be having a lot more tough battles. Some may go her way, some may go mine. Luckily today it went my way, and I’m really happy to be moving on to the semifinals here.”

Brady will next face twenty-fifth seed Karolina Muchova of the Czech Republic, who upset world No. 1 Ashleigh Barty.

With this recent lockdown ending, there will be fans in the stadium. Brady is excited. “It will be great to play in front of people, especially the semifinals. In New York, it was an empty stadium, so it will be a new atmosphere here for me, playing a semifinal of a Grand Slam in front of fans, so I’m really looking forward to it.”