On a perfect tennis-weather Saturday evening on Stadium 1, the octagon-shaped main stadium at Indian Wells, enormous and beautiful with Kelly green seats that blend with the green of the court, and bright yellow Chrysanthemums in planters that bring a burst of color, Daniil Medvedev, world No. 2 and the top seed, who previously had a 3-3 record at the BNP Paribas Open, defeated American Mackenzie McDonald 6-4, 6-2 in one hour and thirteen minutes to reach the third round.

Medvedev, who is a lanky six foot six proved again that he is an excellent mover. He hit blistering backhands, massive forehands where he slings the finish around his neck. He hit deft drop shots, impressive lobs. He is an unorthodox player and so fun to watch.

In his on-court interview, the Russian star said: “I’m actually really pleased because usually I haven’t played well in Indian Wells and I haven’t been playing that well in practices before.

“I’m really happy with my performance. That’s the most important thing no matter how I played before the tournament.”

Medvedev said: “Mackenzie is a really strong opponent, he can put pressure on everybody. I’m happy to be through quite fast.” 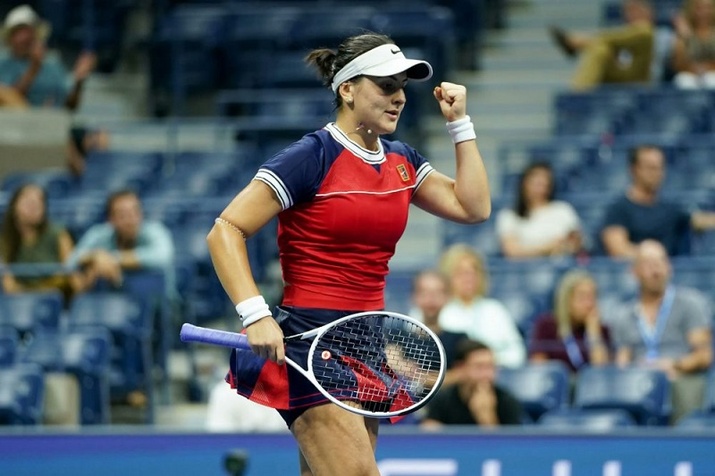 The second match of the night was a battle. Canadian Bianca Andreescu, the defending champion, survived American Alison Riske 7-6 (2), 5-7, 6-2.

In her press conference, Andreescu said: “Yeah, I felt like I could have raised my level a little bit more throughout the match because that’s what she did, that’s how she came back in those important moments.

“But I think the key for me today was to keep my composure as much as I can and not to feel the pressure of the crowd or being defending champion. I think I dealt with that better in the third set.”

Andreescu shares Medvedev’s creative variety of shots. She hit lots of forehand slices, drop shots, and lobs. She must feel that Stadium 1 is a magical court—she’s never lost on it.

She said: “I just want to go into the match like it’s any other match with the same importance. When I focus too much on, like, external things, that’s when things get tricky.

“I try to just focus on the things that I can control. I say that a lot, but it’s super important.

“I feel like this year I kind of got away from that and focused too much on the external. It’s a process. I’m staying patient. I think I did a good job of that today.”

She said she’d been feeling good the last couple of days.