Alcaraz Is Fast Out Of The Gate At Roland Garros

On opening day on the red clay at Roland Garros, in a highly anticipated match on Court Philippe Chatrier, Carlos Alcaraz, the 19-year-old Spanish sensation who is co-favorite (along with Nadal and Djokovic) to win the tournament, defeated 28-year-old Argentine lucky loser Juan Ignacio Londero 6-4, 6-2, 6-0.

It was the first meeting of Alcaraz, world No. 6, and Londero, world No. 141. The Argentine, though, has been ranked as high as No. 50 with most of his success on clay.

It was the first time for Carlos, who likes to be called Carlitos or Charlie, to play on the famous center court. He’d qualified into the main draw last year, but lost in the third round. Londero had played on Chatrier in 2019, when he lost to Nadal in the fourth round. 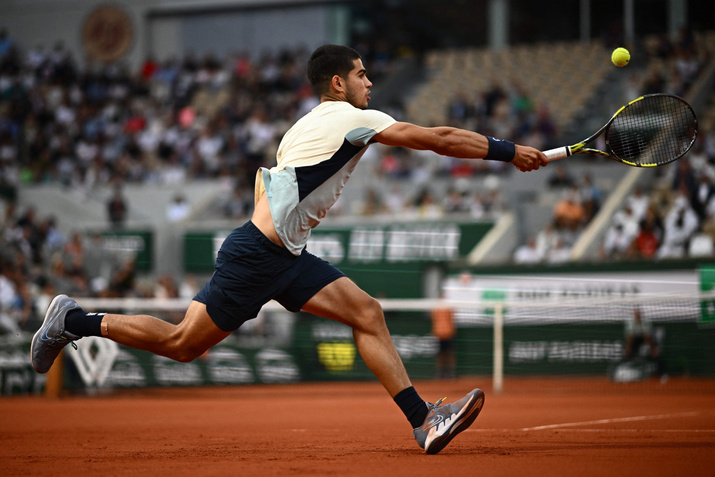 Londero began by swinging freely, hitting with power and depth. He showed excellent feel with two outstanding forehand dropshots. He stayed level until Alcaraz broke at 5-4 with a blistering backhand cross return to take the first set.

In the second set, Alcaraz showed his beautifully disguised dropshot, as well as his crushing groundstrokes. He broke at 4-2 and held with a fantastic serve plus one, a piercing forehand down the line. Londero was still striking the ball aggressively, but he couldn’t sustain that risk-taking level, and he started making errors.

In the third set, Alcaraz raced ahead with a 3-love lead and broke in a very long game with six deuces, when Londero finally missed a forehand swinging volley. Alcaraz then held with an ace and broke for the match when Londero double-faulted and missed a backhand crosscourt.

Afterward, the Spaniard said: “It was difficult at the beginning, but it’s always special to play in such a great stadium, a great court. I’m really happy with the performance in my first match in Philippe Chatrier and hope to play more matches in this court.”

Last year, when Alcaraz made his Roland Garros main draw debut, he was a qualifier who’d only been ranked in the Top 100 for one week.

He’s the youngest men’s champion in the 20-year history of the Mutua Madrid Open.
He’s the youngest player to beat both Novak Djokovic and Rafael Nadal and 1st at same event on clay (Madrid).

Next up for Alcaraz is fellow Spaniard Albert Ramos Viñolas.