Against All Odds: Ferrer, Gasquet Clash in Final Eight

On the day of the draw, laughter flitted around the world of tennis. It was typical:  a sneering spanner had slipped itself into the otherwise seamless arrangement of names. Across the other three brackets, six of the tour’s most notable players were squeezed into the same sections, almost suffocated by the combined weight of the their titles, their success, the enormity of their games and the force that they held over the sport.

For example, it appeared almost certain that a fortnight-stealing titanic battle between two of the sport’s heavyweights was on the cards in the first quarter. Only weeks earlier, Juan Martin Del Potro and Novak Djokovic had collaborated to craft a classic that etched itself indelibly into the minds of all onlookers. But that was grass, and this was to be on both player‘s holy ground of hard courts. If breath was taken from all watching as they squared off on their worst surface, the imminent duel carried the hazard of possibly sending fans into hyperventilation.

One section lower, the promise was of the resumption of quite an interesting rivalry. Tomas Berdych has tirelessly built a winning record over this higher-ranked opponent, and Andy Murray’s style of play perfectly slots into the smothering power of his groundstrokes. On the other side of the coin, the mental edge of competing remains firmly in the Scot‘s court. Last year, the pair competed in cruelly windy conditions that crippled Berdych’s opportunities, and this year presented him with the chance at redemption against Murray.

Finally, Roger Federer and Rafael Nadal were drawn to collide at Flushing for the first time ever. 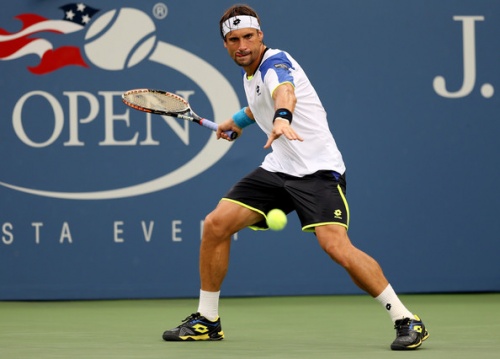 But there was one other matchup, in the third section, that was hardly discussed and usually accompanied with a dash of mocking laughter. This was the bastard child of matchups, the one that existed only to make a mockery of the draw. To skeptical minds, it pitted the impressive but overwhelmingly uninteresting David Ferrer against a Frenchman with vast reserves of talent who has managed to ruin it all in such a shocking variety of ways. Previously, Richard Gasquet blew hot and cold, but nowadays he can be found a country mile behind the baseline, soaking up power and only occasionally offering something substantial. From the frustrating inconsistency of old, he has found his niche in anonymous mediocrity that has left him incapable of challenging the very best.

Thus, this seemed the one hazardous section bound to collapse and offer a surprising battle in the quarterfinals. Ferrer arrived in Flushing in especially bizarre form. Despite the constant mentions of his consistency and regularity, the US Open Series had showcased Ferrer at his worst. Errors, cripplingly poor decisions and an uncharacteristic carelessness seeped into the pores of his game. Ferrer lost early once, he lost early twice, to Bogomolov Jr. one week and to Tursunov the next, both in mind-blowing straight sets featuring not a single hint of bounding fight from the man so constantly complimented for his the relentlessness. Surely this player was not going to reach the quarterfinals? And Gasquet? Gasquet, who had not waded into the quarterfinals of a major since 2007, and whose struggles in the fourth round have become the stuff of legend, surely would not take the opportunity presented to him.

But the contenders came crashing down in comical fashion. Del Potro fell first to an aging Hewitt, Federer followed suit after bitterly biting the dust against another veteran in Robredo and most recently the demise of Tomas Berdych at the hands of the elegant and more-than-capable Stanislas Wawrinka.

It is irony beyond irony. Of all the four quarters, it is the weakest pairing in Ferrer and Gasquet who have both swept into the final eight. Perhaps most interestingly, both have yet to ascend from their recent poor form but, unlike the other top-eight seeds on their flights home, have failed to let that halt them. Ferrer has started to exorcise recent nightmarish performances from his game and psyche. But errors still come by the dozen, and the door of opportunity has swung open for all. Gasquet, meanwhile, pulled off an inspirational comeback against Milos Raonic and finished with confident aplomb. He took the initiative by stealing that hard-fought match as a fifth-set tiebreak against one of the most formidable servers in the game loomed.

But who will be the victor on Wednesday? Common sense and coherency points firmly to the superior player in Ferrer, not the Frenchman who in recent years has climbed back up the rankings before crashing into a glass ceiling that previously did not exist. Most of Gasquet’s performances against top players have lacked any sort of inspiration or realistic threat in recent times. However, the question remains. Surely any top-10 player should be able to bounce out a counterpuncher indiscriminately leaking errors? A player whose most basic aim in tennis is to land the ball between the lines and deny his opponent the gift of free points should not land in the semifinals of a major while doing the complete opposite. So, although undoubtedly tired after a gruelling five-setter and far from his best form, opportunity may just knock for Richard Gasquet.

Whether he can seize it, we shall see.