Patrick McEnroe to be Honored At 120th-Annual Ojai Tennis Tournament 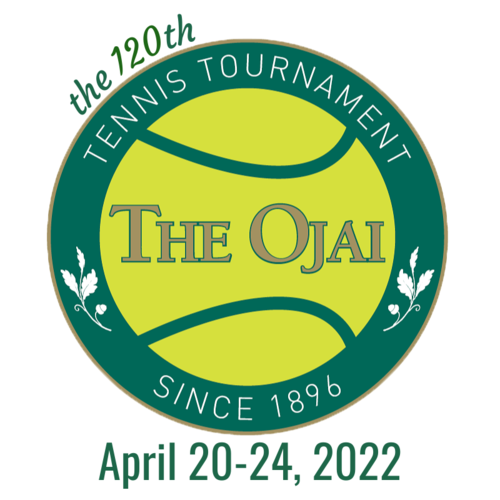 OJAI, Calif.  – The Ojai Tennis Tournament is back!

Following a two-year hiatus due to the COVID-19 pandemic, the venerable and classic tournament which started in 1896 will mark its triumphant return with the playing of the 120th event April 20-24 in Ojai’s downtown Libbey Park. Tournament organizers have announced that Ojai Wall of Fame member and renowned tennis commentator Patrick McEnroe has been named the 2022 Tournament Honoree while Ojai legend and International Tennis Hall of Famer Tracy Austin once again returns as the tournament’s special guest.

The Ojai will once again serve as host to the Pac-12 Team Championships as well as other collegiate competitions such as the Independent Colleges and NCAA Division III West Regionals. The Open Men’s and Women’s Singles and Doubles events will be contested with an overall purse of $20,000 . The tournament also includes the Boys’ CIF Singles and Doubles events, and more junior competitions with the Boys’ and Girls’ 14s and 16s draws and a Girls’ 18s draw.

All prospective players in the junior, Open and collegiate divisions can register for The Ojai by visiting www. TheOjai.net and clicking on the ‘PLAYER INFO’ tab.

McEnroe, the 55-year-old former All-American from Stanford University who won the French Open doubles title in 1989, counts winning The Ojai back in 1987 as a Cardinal junior as one of his major tennis accomplishments. In fact, it was a trophy his famous older brother, International Tennis Hall of Famer John McEnroe, never won.

“There aren’t many of them,” Patrick McEnroe joked. “It was pretty cool.”

In the 1987 Pac-10 men’s singles final, McEnroe beat his good friend, Luke Jensen of USC, in a tight third-set tiebreaker in front of a raucous pro-Trojans crowd.

“I remember there were some fireworks,” McEnroe said. “And the crowd is right on top of you at Libbey Park.”

McEnroe will be feted at The Ojai and honored at The Ojai’s traditional tournament week fundraising event – an exclusive evening featuring food, wine and McEnroe’s reflection on The Ojai and other personal tennis memories on April 22 at 6:30 p. m. at the Ojai Valley Museum (130 W. Ojai Ave., Ojai, CA 93 023). A limited number of tickets ($140 each) are available at TheOjai.net, with proceeds supporting the Ojai Valley Tennis Club, youth tennis programs and tournaments in Ojai, the enhancement of Libbey Park and local school tennis facilities, and The Ojai Tennis Tournament.

Austin will once again be the special guest of the evening event and will interview McEnroe, who won one singles title and 16 doubles titles during a professional career which ended in 1998. He reached career-high world rankings of No. 3 in doubles (1993) and No. 28 in singles (1995). At the 1991 Australian Open, McEnroe advanced to singles semifinals and the doubles final with former Stanford teammate David Wheaton.

After retiring from the professional tour, McEnroe enjoyed a successful stint as the longest-tenured U. S. Davis Cup captain in U. S. history, winning the Davis Cup in 2007. After leaving his Davis Cup role in 2010, McEnroe focused on his television commentary work, and he also served as the General Manager of Player Development for the USTA until 2014. Patrick currently works at his brother John’s academy, the John McEnroe Tennis Academy. Patrick McEnroe lives in Bronxville, NY with his wife, actress Melissa Errico, and three daughters.

McEnroe said he usually had no trouble beating his junior doubles partner, Luke Jensen, save for that April day in 1987 when the two met in the Pac-10 final at The Ojai.

“Normally, I would beat Luke comfortably,” said McEnroe, who graduated from Stanford in 1988 with a degree in political science. “I remember it was a real dog-fight and Luke was incredibly fired up. I was extremely lucky to pull it out in the end.

“Even though we did well as a team and won NCAA titles (1986 and ’88), I felt like I never did as well at the NCAAs. Winning at Ojai was the highlight of my individual college career.”

McEnroe said his memories are fond of Ojai, whether he won the tournament or not. “It was always something where we at Stanford looked forward to a lot because it was a trip to Southern Cal,” said McEnroe, who has been back to Ojai just once, some 25 years ago. “It was obviously a very intense competition, but it was always sort of a more relaxed environment than going to play at SC or UCLA in big dual matches. It was the last event before we started gearing up for the NCAA so it was combination of a competitive event plus a relaxed event with all the teams from the Pac-10. I remember the orange juice, which was amazing, and am looking forward to having some orange juice again.”

McEnroe called Austin a great friend and a Southern California stalwart: “We haven’t shared the booth as much as we have done a lot of appearances together and corporate hospitality events. She is a delight to work with and a total pro. In broadcast and speaking, she is like she was as a pro – very diligent, incredibly focused and always prepared. That’s how people remember her as a player.”

Austin, a resident of Rolling Hills, Calif., is no stranger to The Ojai and was the 2018 tournament honoree. Her son, Brandon Holt, is a former Ojai CIF champion and currently on the pro tour while her youngest son, Sean Holt, is a freshman on the USC team. She first burst onto the tennis scene in winning The Ojai in 1977 (Women’s Open singles) and 1978 (Girls’ 16s singles), just one year before becoming the youngest player to win the US Open at the age of 16. The former World No. 1 beat Martina Navratilova in the semifinals and Chris Evert in the final at that 1979 US Open and was later named that year’s Associated Press Female Athlete of the Year.

Austin went on to win 30 singles titles and five doubles titles during her amazing professional career. Austin holds the distinction as being the youngest player to be inducted into the International Hall of Fame (in 1992). She can be seen at tennis’ top events and has been the face of the US Open for more than 20 years for USA Network and Tennis Channel.