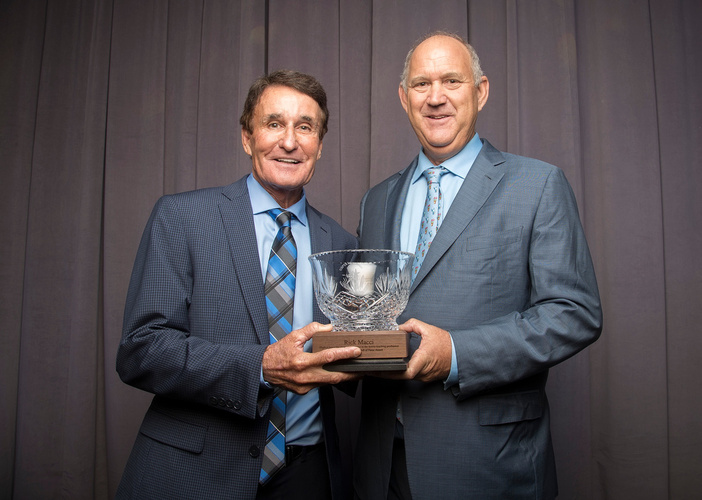 ORLANDO, Fla – Harry Hopman & Rick Macci were inducted into the United States Professional Tennis Association (USPTA) Hall of Fame at the Awards Luncheon on Friday, Oct 13. during the NEXT Generation: A Tennis Innovation Workshop powered by USTA & USPTA at the Renaissance Orlando at SeaWorld.

The USPTA Hall of Fame is the association's highest honor and serves as a place to recognize excellence in the tennis profession and commitment to USPTA, the world's oldest and largest association of tennis-teaching professionals. The award was renamed in honor of the late Tim Heckler, who served as the CEO of the USPTA for 30 years, from 1982-2012.

Harry Hopman is known throughout the tennis industry as the most successful Davis Cup captain leading the country of Australia to 16 World Championships from 1939-1967. Hopman inspired a leu of Australia tennis greats including players like Mal Anderson, Ashley Cooper, Roy Emerson, Neale Fraser, Rex Hartwig, Lew Hoad, Rod Laver, John Newcombe, Tony Roche, Mervyn Rose, Ken Rosewall, Frank Sedgman, and Fred Stolle. Hopman was known on the ATP World Tour for capturing the 1929 & 1930 Australian Men's doubles title alongside with Jack Crawford and four mixed doubles titles. After consecutive years of success in the Davis Cup, Hopman moved to the United States in 1969 and became a highly successful tennis-teaching professional at the Port Washington Tennis Academy in New York. He later moved to Largo, Florida with his wife Lucy and opened the Hopman Tennis Academy and lived in the city until his death in 1985.

Rick Macci is an iconic tennis- teaching giant. Over the past 40 years his overall innovative, unique, and powerful on court philosophies and passion have inspired millions of players and coaches at each level. Macci has coached players such as Karim Alami, Jennifer Capriati, Tommy Ho, Sonia Kenin, Bethani Mattek, Anastaysia Myskina, Mary Pierce, Tina Pisnik, Andy Roddick, Christan Rudd, Maria Sharapova, Vince Spadea, Venus and Serena Williams, and hundreds of other professional tour players around the globe. Since 1985, Macci and his academy of USPTA professionals have produced 247 USTA national championships in singles and doubles. Rick has been an instructional editor for Tennis Magazine for over the past 30 years.

A high demand motivational speaker, clinician, and author, his award winning book, Macci Magic , a self-help novel and a snapshot of players Rick has coached, is one of the most read tennis books ever. Macci has also consulted for Trump Management from 1998 to 2004. Macci, along with the USPTA, has produced many award-winning videos and his Improved Forehand Technique with Rick Macci video delivered more than a million views on YouTube. Macci is in the Hall of Fame for Basketball and Tennis in his hometown of Greenville, Ohio. He was honored recently by the USTA with the USA Legendary Coach Award.

He is also in the USPTA Florida Hall of Fame and has been named Coach of the Year numerous times in Florida and won the USPTA Alex Gordon Professional of the Year Award in 2006. Macci now coaches at The Rick Macci Tennis Academy in Boca Raton, Florida, which has thousands of kids and adults visit throughout the year.

The USPTA National Awards program is conducted annually. Nominations are submitted by the organization's 17 divisions and by individuals. Recipients in each category are decided by the USPTA Awards Committee.