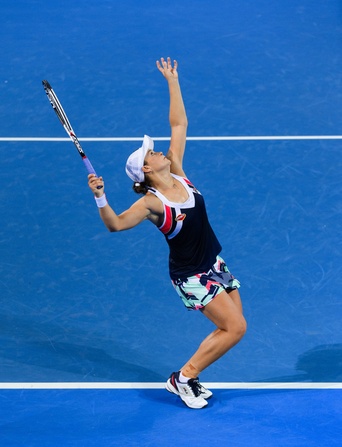 (FILA Global) - FILA announced today that it has extended its relationship with Ashleigh Barty, the 2017 Newcombe Medal winner. Barty is on the company’s roster of endorsed ATP World Tour and WTA Tour players who wear the FILA® brand on-court.

“Ashleigh’s incredible and inspiring comeback last season has proven she has the drive, determination and talent to achieve continued success,” said Gene Yoon, Global Chairman at FILA. “As one of the game’s rising stars, Ashleigh’s future holds great promise and we are thrilled to support her on this journey.”

Barty, 21, is currently the #19 ranked player on the WTA Tour. After taking a break from professional tennis to play cricket in Australia, the former junior Wimbledon champion started 2017 ranked #271. Barty’s stellar season included her first WTA title at the Malaysian Open. During this breakout year, Barty also reached two additional WTA Tour singles finals, as well as the French Open doubles final. She was awarded the 2017 Newcombe Medal after finishing the year as the highest-ranked Australian player. Throughout her career, Ashleigh has amassed five WTA doubles titles and has reached the doubles final at each of the four grand slams. Barty has also been a member of the Australian Fed Cup team.

“FILA has a long history of supporting champions so I am honored to represent the brand on-court,” said Barty. “I have worked hard to improve my game and hope to build on the success of 2017. I am excited to have the support of FILA as I look forward to the coming season”

FILA has a long and distinguished history in the world of tennis that continues with endorsements of ATP World Tour and WTA Tour athletes. FILA is a sponsor of the BNP Paribas Open, the Dell Technologies Tennis Hall of Fame Open, the Rogers Cup and Coupe Rogers, the Porsche Tennis Grand Prix, the Mercedes Cup, the Argentina Open, the Rio Open, the Brasil Open, the German Open and the Junior Orange Bowl International Tennis Championship. In addition to event partnerships, FILA is an official supplier to Tennis Canada, Junior Tennis Champions Center, Van der Meer Tennis, John Newcombe Tennis Ranch, and the Kim Clijsters Academy in Belgium.

The FILA® brand was established over a century ago by the FILA brothers of Biella, Italy. FILA® is now a leading sport and leisure footwear and apparel brand that is distributed worldwide. FILA has achieved world-class recognition in tennis by marketing high design and style content products that are endorsed by professional athletes from around the world.
Visit www.FILA.com to see the full collection of tennis apparel and footwear.