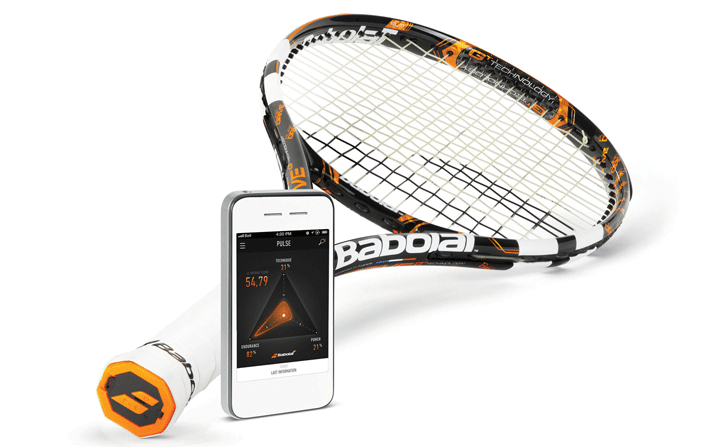 Ever wonder how hard you hit a tennis ball or how much spin you generate? Now, after 10 years of tweaking, the December launch of the Babolat Play means never having to speculate. As the world’s first connected racquet, tennis players will receive hard data about their game.

“Sharing and comparing experiences through digital tools is becoming the new normal,” said Eric Babolat, president and CEO. “We’re adding concrete information to the sensations players receive. I believe that in the near future, all tennis racquets will be connected.”

Without changing the specs of the racquet, Babolat integrated sensors in the handle of the racquet. The Babolat Play Pure Drive has the same physical specifications as a regular Babolat Pure Drive racquet: 100-square-inch head size, 10.6-ounce balance, 320-millimeter/7-point HL and a 1-5 grip. The Babolat Play retails for $399.99. To find an authorized dealer, visit babolat.com or babolatplay. com.

Player Analysis Technology includes any equipment that collects, stores, transmits, analyzes or communicates information on player performance and may be a stand-alone device or incorporated within existing equipment.

The Babolat Play Pure Drive, a new racquet that gathers data about the player’s game, including shot power, ball impact location, and spin level. Eric Babolat says they have been working closely with the ITF to respect the rules of tennis.

“The ITF does not often modify the rules of tennis – this is only the 31st rule. So, we know this is an important moment in tennis – a sign of the times, for sure,” says Babolat.

While the ITF says players may use Player Analysis Technology during play, the athlete, however, cannot access that data until the match has been completed because the information constitutes coaching under the Rules of Tennis.