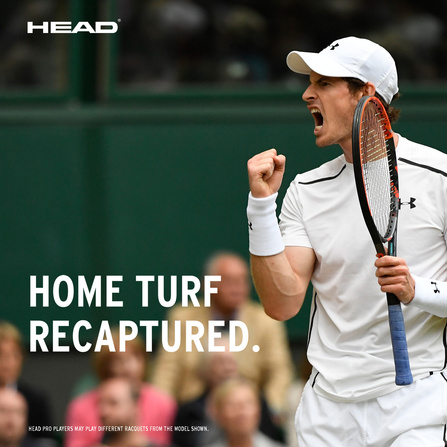 London, England –  Andy Murray made more history as the HEAD player won his second home title on the grass in London, beating the Canadian Milos Raonic 6-4, 7-6(3), 7-6(2). The Racquet Hero who recommends the HEAD Graphene XT Radical tamed the huge serve of his rival, playing a major final for the first time.

Murray captured his second title at the most iconic tennis tournament after claiming his first in 2013. The HEAD ace earned his third Grand Slam trophy after starting his big-match success in 2012 by winning the Grand Slam in New York. The Scott ended his grass season with a perfect 12-0 record after also winning the tune-up Queen's event - beating Raonic in West London by coming back from a set and a 0-3 down, and has now claimed his third title of the season after Rome and Queen's. The 29-year-old No. 2 has beaten Raonic in their last six meetings.

Murray claimed victory over Raonic in two and three-quarter hours as he held the biggest serve in the game to eight aces. He dominated for the straight-sets success as he obtained both tiebreakers against his opponent.

“This is the most important tournament for me every year”, Murray said after his victory. “I've had great moments here and tough losses. These wins are special, I'm so proud to get my hands on this trophy again. I played some really good stuff today. But Milos also had some great weeks on the grass. When I won in 2013, I didn't have time to enjoy my victory, I'll make sure I do that for this one.”